The State of Eritrea, which attained its independence after a referendum in 1993, is situated on the Western shore of the Red Sea and has a coastline spanning over 1,200km and a total land area of 124,000km. It exhibits a varied topography, rainfall and climate with altitude that ranges from 120 meters below sea level to over 3,000 meters above sea level.

Eritrea was diverted from its development path after independence by the 1998-2000 boarder conflict with Ethiopia followed by a “no-war, no-peace” situation including ten years of international sanctions. Relations with Ethiopia were normalised with the signing of the peace agreement between the two countries in July 2018, which was followed by the lifting of sanctions by the United Nations Security Council in November 2018. Since then, Eritrea has been gradually moving towards development and resilience-building, but remains highly vulnerable to economic, climate and exogenous shocks, including fluctuating commodity prices for its raw material exports. Eritrea’s GDP is driven by services (58.9 percent) and industry (23.5 percent). Agriculture and fisheries contribute only 17.6 percent, although the sector employs 65–70 per cent of the population.

Eritrea is still faced with many development challenges. The main economic sectors are yet to fully recover from the effects of years of tension and conflict. The situation has been worsened by periodic droughts which, given the country's dependence on rain-fed agriculture, make it highly vulnerable to food and nutrition insecurity.

Eritrea has managed to make progress on some development indicators and was the only African country to achieve all three public health goals of the MDGs, and among the top ten best performing countries in terms of maternal mortality. Progress is also being made on several SDGs (especially 3, 13 and 15), though information and data on progress towards other SDGs is limited.

About OCHA ERITREA
The OCHA Country Office in Eritrea was established in 2000 following the 1998-2000 border conflict with Ethiopia.  A main office was opened in Asmara along with two sub-offices which were later closed in 2006 when the Government of the State of Eritrea (GoSE) requested OCHA to stop issuing humanitarian appeals/CAPs.

Since that date, programmes and projects of an urgent or humanitarian nature have been built into the UNDAF and, since 2013, the joint UN-GoSE Strategic Partnership Cooperation Framework (SPCF). OCHA has been coordinating humanitarian response on an annual basis, which constitutes part of the five-year development cooperation framework (2017-2021), that requested US$329 million, and will continue to do so within the upcoming cooperation framework (2022-2026). Working closely with the UN Country Team in Eritrea, the OCHA Country Office coordinates humanitarian analysis, prioritisation and response through the projects of UN agencies which work closely with their Government implementing partners, and in the absence of INGOs. Priorities are consolidated into the UNCT Basic Services Response Priorities (BSRP) document. This document consolidates the most urgent projects from within the Food Security and Livelihoods (FSL); Nutrition; Health; Water, Sanitation and Hygiene (WASH); Basic Education; Multi-sector support to Refugees; and Child Protection sectors. In this way, the BSRP prioritises urgent projects which contribute to agreed development outcomes, and is therefore in line with government priorities.

In 2021, basic services requirements totalled $32.9 million, targeting 1.04 million people in all of the country’s six regions (Zobas). Drought remains a key driver of needs in Eritrea in 2021, with effects on livelihoods, food security and nutrition. This is compounded by the risks related to transboundary animal and human diseases. The effects of drought and irregular migration are affecting female-headed households which make up 47 per cent of households nationally, reducing the resilience of families and increasing social vulnerabilities for children, especially those living with disabilities. Malnutrition remains a key concern in Eritrea, with four of the six Zobas reporting Global Acute Malnutrition (GAM) rates well above WHO emergency thresholds (2016/17). Access to health services in remote and hard-to-reach areas is also a cause for concern, including maternal health, newborn health and immunizations. While Eritrea has been proactive in successfully containing the spread of COVID-19 in the country, the socio-economic impacts of such measures are affecting the population, particularly vulnerable groups. Other needs include education support for out-of-school children and access to improved sanitation. People in border areas, particularly children, are also at increased risk of mines and explosive remnants of war (ERWs). Furthermore, a small caseload of urban refugees in Eritrea is reliant on assistance for their livelihoods and well-being.

OCHA’s presence as an active member of the UNCT in Eritrea ensures that urgent and humanitarian issues are integrated into wider development processes. In coordination with the UNCT and the RCO, OCHA also facilitates the UNCT’s preparedness and contingency planning processes. Furthermore, OCHA expertise in information management ensures production of regular resource mobilisation data, snapshots and analysis on behalf of the UNCT, as well as assisting UN agencies and partners with visualisation, GIS and mapping services.

OCHA Eritrea supports the resource mobilisation efforts of the UNCT, with particular focus on urgent response and basic services, as articulated in the BSRP. This is done through OCHA’s own engagements with donors, as well as support to the RC/HC and UNCT in their resource mobilisation efforts. OCHA maintains close and regular contacts with both resident and non-resident embassies and donor partners, providing regular updates and briefings. OCHA also coordinates CERF applications and processes in support of allocations for Eritrea.

Among the challenges affecting the delivery of assistance in Eritrea are limited availability of, and access to, data and needs assessments, as well as bureaucratic processes related to procurement, financial transactions and travel. The UNCT continues to work with government implementing partners to deliver assistance within this context, while also advocating for improvements to the operating environment.

Unearmarked contributions (or commitments) are those for which the donor does not require the funds to be used for a specific project, sector, crisis or country, leaving OCHA to decide how to allocate the funds.

OCHA Eritrea, together with UN Country Team and government partners, commemorated World Humanitarian Day on the 19th of August 2021. Six government Ministers and other representatives of government offices joined UN staff members in commemorating the event, which began with a minute of silence to remember fallen humanitarians around the world, followed by a ‘short walk for nature’ and tree planting, to demonstrate the UN’s support for the “Greening Eritrea Initiative”.  The event was held 3km northeast of Asmara city. 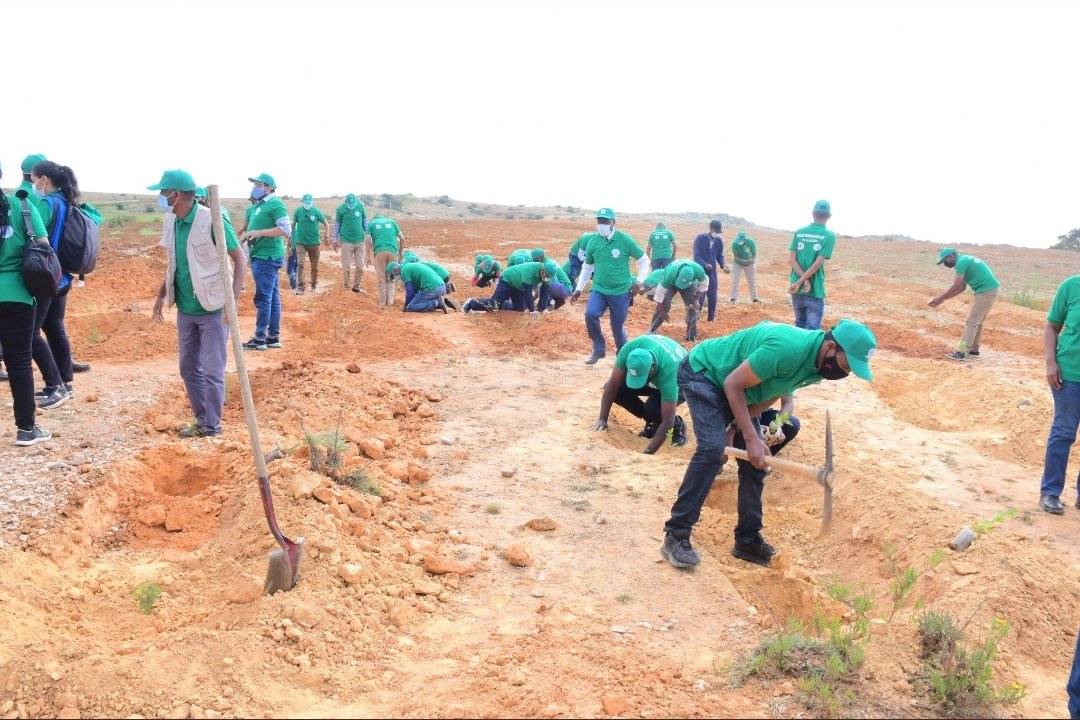 OCHA coordinates the global emergency response to save lives and protect people in humanitarian crises. We advocate for effective and principled humanitarian action by all, for all. OCHA speaks on behalf of people affected by conflict and disaster